Understanding this Vitamin D fact sheet, I am sure you will agree that sensible exposure to the sun's UVB rays and the resultant Vit D3 boost, should be seen as essential to good health today. The 'sunshine vitamin' is named thus because it is produced primarily in the skin through a chemical reaction that requires UVB sunlight rays. I like to believe that it is also because for thousands of years it used to be an effective treatment for a number of diseases.

Vitamin D fact sheet no. 1 - What is Vitamin D?

Vitamin D is one of the chemicals produced by the skin that is ultimately found in cells throughout the body and is essential to the health of our bones and muscles. It helps the body to absorb calcium without which you may develop soft, thin and brittle bones, a condition known as rickets in children and osteomalacia in adults.

Vitamin D is important to the body in many other ways as well. Muscles need it to move, for example, nerves need it to carry messages between the brain and every body part, and the immune system needs vitamin D to fight off invading bacteria and viruses.

From an overall health perspective, Vitamin D plays an important role in the general maintenance of our organ systems, efficient mineral absorption, bone health and general immune well being. Vitamin D enhances the efficiencies of calcium and phosphorus absorption in the intestines and calcium in the kidneys which results in effective regulation of these minerals in one's blood.

Where bones are concerned, Vitamin D is essential for the strong development of bone formation but if too high can actually promote some resorption of bone and counteract this strength.

As an immunosuppressant it is quite powerful in that is a major mechanism to remove pathogens, bacteria and dead tissue cells. It also promotes anti-tumor activities.

Research undertaken by Edward D. Gorham, William B.Grant, et al on the geographic distribution of Ultraviolet A (UVA) and B (UVB) was done in order to understand the importance from a biological perspective. There was considerable variation in UVB (Figure 1) and UVA (Figure 2) irradiance among countries. Both types of ultraviolet radiation predominated in areas near the equator and were markedly lower in areas distant from it.

UVB is needed for photosynthesis of vitamin D3. Since this is the best source of Vitamin D3 and we get this by exposing our skin to the sun's UVB rays, there are some important considerations in managing our exposure to the sun.

If your shadow is longer than you are,
you are not making enough Vitamin D

The sun's UVB radiation strength will vary according to: 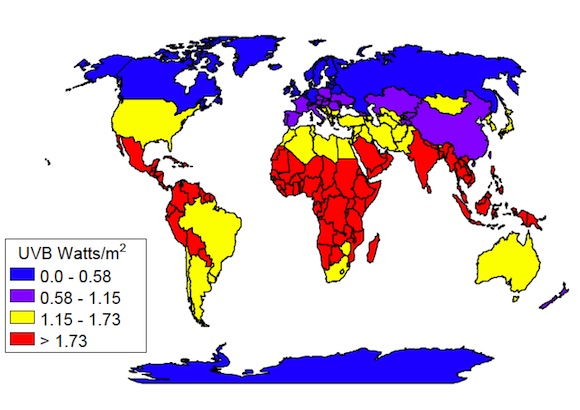 Effect of Latitude on UVB strength

Regular sensible sunlight exposure and the resultant increase in Vitamin D levels, helps to prevent melanoma, but heavy sunlight exposure together with the use of toxic chemical sunscreens can increase your melanoma risk. This is especially so when the sunscreen offers no protection from UVA and only blocks the UVB rays, which are the very ones providing you with the ability to synthesize vitamin D. The sunscreens without UVA protection actually allow the lower layers of the skin to be damaged for longer periods of time than they would had you worn no sunscreen at all. Most of the chemical UV filter ingredients in sunscreens absorb UVB but not UVA so they do more harm than good by reducing vitamin D and increasing the risk of cancer.

A sunburn will maximise Vit D3 creation but these same benefits can be obtained without burning, so why burn? In as little as 10 minutes with full body exposure, especially if fair skinned, you may create 10,000 IU's of Vitamin D. After that you can use sunscreen, but make sure it offers both UVA and UVB protection. A physical, or otherwise known as a mineral sunscreen ingredient such as zinc oxide or titanium dioxide will offer you this broad spectrum protection.

There are 20 or more internal cancers that have been identified by various scientific bodies and research, that Vitamin D3 has been seen to reduce or inhibit, including:

Weak bones result when calcium that regularly leaves the body through excretion, is greater than that absorbed by the bones. Vitamin D is essential for calcium to be absorbed correctly through the intestines. If our Vit D levels are good, we only need a small amount of calcium. Conversely, we can consume enormous amounts of calcium with no effect if Vitamin D levels are not high enough.

Vitamin D is also required for successful absorption of calcium into the bones.

Osteomalacia as well as fibromyalgia have been successfully treated with both Vitamin D supplementation as well as increased sunlight exposure.

Vitamin d supplementation has also been seen to halt the progress of arthritis and decrease the loss of joint cartilage.

Vitamin D has been shown to be crucial to the intelligent functioning of the T-cells, so with supplementation has the ability to suppress or even prevent the relevant autoimmune disease. Examples are of where immune system T-cells assault and kill certain targeted organs:

Sunlight and vitamin D lowers cholesterol and blood pressure. Also, the lower the level of vitamin D, the greater the risk of arterial calcification. Some other auto-immune diseases helped with Vitamin D supplementation are:

An alkaline diet rich in fruit and vegetables rather than acidic animal products is also beneficial for efficient conversion of vitamin D to calcitriol, the active form of Vitamin D.

Populations with high animal protein consumption have far greater bone fractures than those with low consumption rates. Sunlight exposure has the ability to build bone mass and reduce the rate of bone fracture rates so eliminate fats not sunshine.

Increasingly, nutritionists recommend that you boost your daily intake because of Vitamin D's potential to help fight certain types of cancer. A short stroll in the sun supplies enough vitamin D to maintain healthy bones, as it is believed that vitamin D tells the body to absorb more bone-building calcium from foods.

In a study of 47,800 men, scientists at the Harvard School of Public Health reported that 1500 International Units (IU) daily of vitamin D reduced the risk of cancers of the digestive system by 43%. Another study from the University of California at San Diego, containing 1760 women, suggested that 2700 IU daily of Vitamin D may reduce breast cancer by 50%.

The most powerful source of vitamin D is the sun. In just 10 minutes, a light skinned person produces anything from 10,000 to 20,000 IU of vitamin D. Skin pigments can interfere with vitamin D synthesis, as darker skinned people produce vitamin D more slowly.

If you cannot get into the sun for various reasons, know your foods high in Vitamin D, or you can resort to pharmaceutical supplementations.

Dr. Friedrich and colleagues at the University of Saarland in Germany

Association Between Altitude and Mortality in Incident Dialysis Patients

"Your Best Health Under the Sun" by Al Sears, MD And Jon Herring

Grant W, "An estimate of premature cancer mortality in the USA due to inadequate doses of solar UVB radiation."

Do you have a
question or concern?

See what's being discussed, ask for help, give your thoughts or experiences, or just browse...

Is this the future
of medicine?

Although this web site is not intended to be prescriptive, it is intended, and hoped, that it will induce in you a sufficient level of scepticism about some health care practices to impel you to seek out medical advice that is not captive to purely commercial interests, or blinded by academic and institutional hubris. You are encouraged to refer any health problem to a health care practitioner and, in reference to any information contained in this web site, preferably one with specific knowledge of progesterone therapy.

This work is licensed under a Creative Commons Attribution 3.0 Unported License